How Much Does A Below Knee Prosthetic Leg With A Pin Cost?

Subscribe to Newsletter
How Much Does A Below Knee Prosthetic Leg With A Pin Cost? 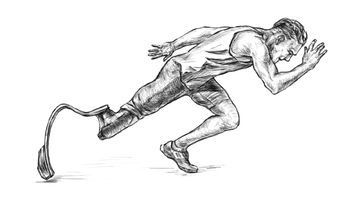 Since our start in 2012, we have provided prosthetic and orthotic services to many individuals in many different counties of Illinois.  This service is provided at peoples homes, nursing homes, assisted living facilities and sometimes in a medical center.  One common question we get from people is how much does a prosthetic leg cost?  Since we are all about transparency, you will find the answer to that question in this article below.

The following article relates to the costs associated with a typical below knee prosthetic leg with a pin suspension system.  (This covers all types of pin systems, not just prosthetic costs for runners, as seen above).

The Price Range for below knee prosthetic leg

As much as we want to give you a single price, it is not that simple.  You will be glad soon that we did not give you one price either, as you read on.

The reason for the range is that there is some variance in componentry.

Componentry is the functional pieces that make up a prosthesis.  Just as with everything else you might purchase, there is the standard version and there is a premium version based off the needs of the purchaser.  Together, the different components act as one system.

The components have prices and quantities.  If you choose to only go with one of each of the Lcodes listed below then you can get a below knee prosthesis for the cost of $5790.  If you choose to go with all of the Lcodes below (meaning multiple gel liners (2), multiple multiply and single ply socks (12), multiple shrinkers to alternate (2) and a K4 foot, then the price can get up to $17,206.00 approximately, before any insurance or other coverage kicks in.

Not all amputees who are runners are going to go with a pin system, but we are pricing this out as it is a possibility and you will need to know that if you move forward with getting a prosthesis.

The Prosthetic Foot & How It Changes The Price Range

A large price determinant for a prosthetic leg for example is the foot.

The more expensive prosthetic feet that are available can really increase the cost of a prosthesis.

*Don’t worry, we go more into K levels as you read on past this foot section.

Just as a reference, within each family of prosthetic feet here are some common prices we found :

This is the cash price if you were paying for your prosthesis, but insurance and Medicare have been known to cover 80-100% of the cost for a prosthetic leg if all the documentation and medical necessity are satisfied.

Remember as well, that these are just some examples of what the different feet cost.   There are over 270 prosthetic feet available as of the time of this writing.

A detailed look at prosthetic foot costs will specifically be addressed in a different article. 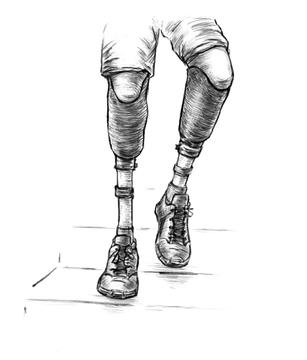 What Else Matters When Trying To Understand the Cost of a Prosthetic Leg?

The key to learning about a price of a leg is in large part due to your K level.

Do you know your K level?

In simple terms, your K level is how much you are able to move about independently.

A K-level relates to the level of ambulation (walking) that you have or have the potential to be in the near future.  Not everyone is an Olympic athlete or a weekend warrior, for example.  But some folks are more inclined to be an exercising type of person compared to someone who really only needs a prosthetic leg to stand and transfer, or maybe walk from the bedroom to the bathroom on a level surface.

Both are amputees.  One is not better than the other, but the functional levels (the k levels) are much different.

You can see the difference now very quickly and figure out that these two people would need some different componentry.

K0 = Someone who is not going to use a prosthesis because they will not be able to walk or have the potential to walk in the near future. 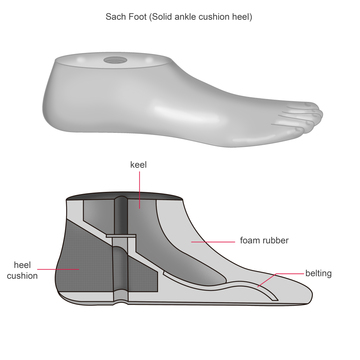 SACH Foot (Solid Ankle Cushioned Heel) : K1 Foot An ambulator who gets something called a SACH foot (solid ankle cushioned heel foot) and it is very basic.  Not bad, just basic.  A K1 ambulator is basically a person who walks indoors and walks on level surfaces.  Someone who probably uses an assistive device, such as a cane or two handed walker.  A k1 ambulator doesn’t probably leave the house much and does not typically go up and down curbs or stairs too much either.

K2 = A K2 ambulator (walker) does a little more.  They can walk over small things in front of them like a curb, or climb a stair.  But by no means are they are runner or a fast walker.  This foot is slightly more advanced, thus the price goes up.  There are many different K2 feet, so showing just one picture here would not do it justice.

A K3 ambulator can do more.  They can typically walk around in their community at different speeds and they can also traverse most environmental barriers.  This foot is the next level up again, above a K2 foot, so you can already guess that the price increases.  This person is referred to as a “community ambulator” and inclines and other obstacles are not so much of an issue for this person as compared to the K1 ambulator.

A K4 ambulator is someone who is super active.  Someone who is a very active adult or child who may do sports for example.  This is the most advanced type of foot.  Therefore, the prices for this can be expected to be at their highest with this kind of amputee K level.  Think athlete when you think of a K4 foot.  A K4 amputee does not have to be an Olympian, they just have to be an athlete. 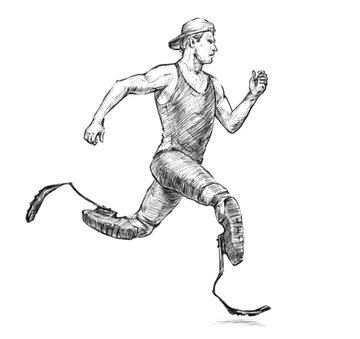 The following prices are derived from two major coverages available today for people and they were averaged.  The two prices were most often times within $10 of each other before the average took place, as of the time of this writing.  The averages were rounded up to the nearest dollar. 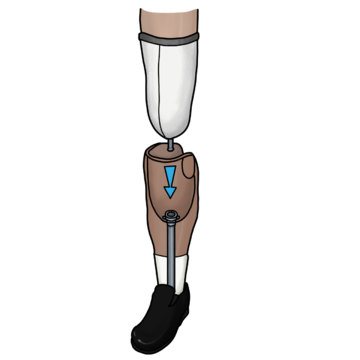 The picture above is a depiction of a pin locking system

Can You See The Price Factors Now ?

In our best efforts to help you learn more, we have to give you a range on cost, because many factors go into the price.  Just like any product with different levels of sophistication and different features,  prosthetic legs are no different.

Whatever price we give you here, could also be negated also if you have insurance or Medicare as well.  Because they can help you cover 80% – 100% of the leg depending on what kind of coverage and plan you have.

There is always a variance in this regard because many people have different plans, based on the different subplans out there, under the major insurance names you typically hear.  Moreover, if you have a plan with a high deductible, then you are going to have to deal with whatever dollar amount that is first before coverage starts, often times.

The price we gave you above $5790 – $ 17,206.00 is an approximation and the very best we can do is get you close.   It is an educated approximation.  Why an approximation?   Not because we want to make things confusing for you, but the issue is there can be add ons.  Also, reimbursement levels go up and down from state to state and over the years as well.

Most people do not pay cash for a prosthetic leg, but if you do, then at least now you know what the range is so you know more where you are at on costs.

Additionally, if you are paying cash, and you wanted to really minimize your costs (at the risk of potentially subtracting from your treatment) then you could ask your prosthetist to only do one test socket (again, this is not necessarily best practices but it could reduce your price).  Or, you could ask your prosthetist to only give you one gel liner (again, not necessarily recommended from a treatment point of view, but it will reduce the costs.   These are just two examples, but these are dollar amounts you could shave off to get you going and it would make the range closer to this dollar amount : $5790, as we mentioned above.  (Many people at least get two gel liners, just an FYI for hygiene purposes and to extend the life of the liners.)

We presented a lower end price for a more basic prosthetic leg and a higher end price that exists for high impact sports playing amputees.  Due to componentry differences and K Levels you can now see why one price for a prosthesis is not fair to give.

We hoped this information helped you.

As mentioned earlier, we will be diving in more on this topic in other articles.  Such as : prosthetic feet, liners, sockets, socks and different suspension systems.

*Rinella Prosthetics & Orthotics can not be liable for potential costs you may incur at other facilities.  We wrote this article with best intentions and are trying to get people close to what the actually prices really are.  However, we can not control what other vendors do or do not charge or the Lcodes that are required in the treatment you are receiving.

« 10 “Must Haves” When Coming Home From An Amputation Surgery

Below Knee Prosthetic Leg Cost With Suction Suspension »
Make a Call
We use cookies to ensure that we give you the best experience on our website. If you continue to use this site we will assume that you are happy with it.I Understand